Virtual racing and automotive safety technology have more in common than you might think. Presenting the Mobileye GT World Challenge Esports Championships.

If you had to choose two of the most pivotal innovations in modern history, what would they be? For us here at Mobileye, they’d surely be the automobile and the computer. It’s at the confluence of these two that we continue to innovate – and we find ourselves in good company.

Today the SRO Motorsports Group announced our title sponsorship of the Mobileye GT World Challenge Esports Championships. This marks our first foray into the exciting realms of motor racing and esports. But just what, exactly, does virtual racing have to do with the automotive safety tech for which Mobileye is known? A lot more than you might think....

Autonomous vehicles represent an emerging development that leverages new advancements in computational technology to significantly disrupt the way we interact with motor vehicles. The same can be said of virtual racing... but that’s not where the similarities end.

Both AV tech and sim racing revolve around the digitization of the automobile and driving environment. We’re transforming cars into a computer on wheels; virtual racing puts the car onto computer. We’re digitally mapping the world’s roadways, while racing simulators digitally replicate the racetrack. The real commonality, however, lies in the fundamental change being unlocked by both developments.

Competing in motorsports has traditionally been open only to a select few. In addition to skill, drivers need to be in the right age bracket, physical condition, and geographic location to compete seriously – not to mention the substantial financial resources required to engage in such an inherently expensive activity. By contrast, moving into the virtual domain opens competition to a much wider talent pool, where the cost of entry is limited principally to a decent computer (or console) and wheel/pedal setup.

That paradigm shift closely parallels the promise that self-driving vehicles hold, to democratize independent automobility for the masses. Because individuals don’t need a driver’s license to be transported via AV, their use will be open to everyone – regardless of age or level of physical or mental capability. Furthermore, the advent of self-driving Mobility-as-a-Service will remove the considerable cost of car ownership from the user, too.

Motor-racing might seem like the polar opposite of the automotive safety that Mobileye seeks to enhance. But in modern racing, safety is paramount.

Professional racing drivers know that “to finish first, you first have to finish.” In other words, reckless driving (whether on road or track) is not only dangerous, but probably counterproductive, too. What’s more is that virtual racing eliminates the risk to life and limb entirely, leaving only the competitive spirit and enthusiasm for automotive technological advancement which we wholeheartedly share.

Much like Mobileye, motor racing has become a substantial incubator for advancements in automotive safety. Manufacturers and organizers involved in motorsports are also constantly innovating ways to make racing safer. And many of those advancements then make their way into standard production cars.

Ladies and Gentlemen, Start Your Engines

With so much shared in common, we’re excited to team up with SRO and to engage with the growing legions of virtual-racing fans around the world.

The partnership encompasses the three individual Mobileye GT World Challenge Esports Championships in Europe, Asia, and America. It also includes the exciting new Intercontinental GT Challenge Esports Championship Powered by Mobileye, which brings teams of competitors from around the world together for virtual endurance races. Guest racers will compete in our virtual branded car. Fans will be able to vote for the most impressive racing maneuvers with the new Mobileye Innovation Award. And we’ll be present as well in the real-life Fanatec GT World Challenge Europe Powered by AWS and its virtual counterpart, the Fanatec Esports GT Pro Series.

Read the full press release from the SRO Motorsports Group and visit our esports webpage for more. Check out this year's updated calendar of events at bottom, and tune in to watch the virtual races in the playlist below. 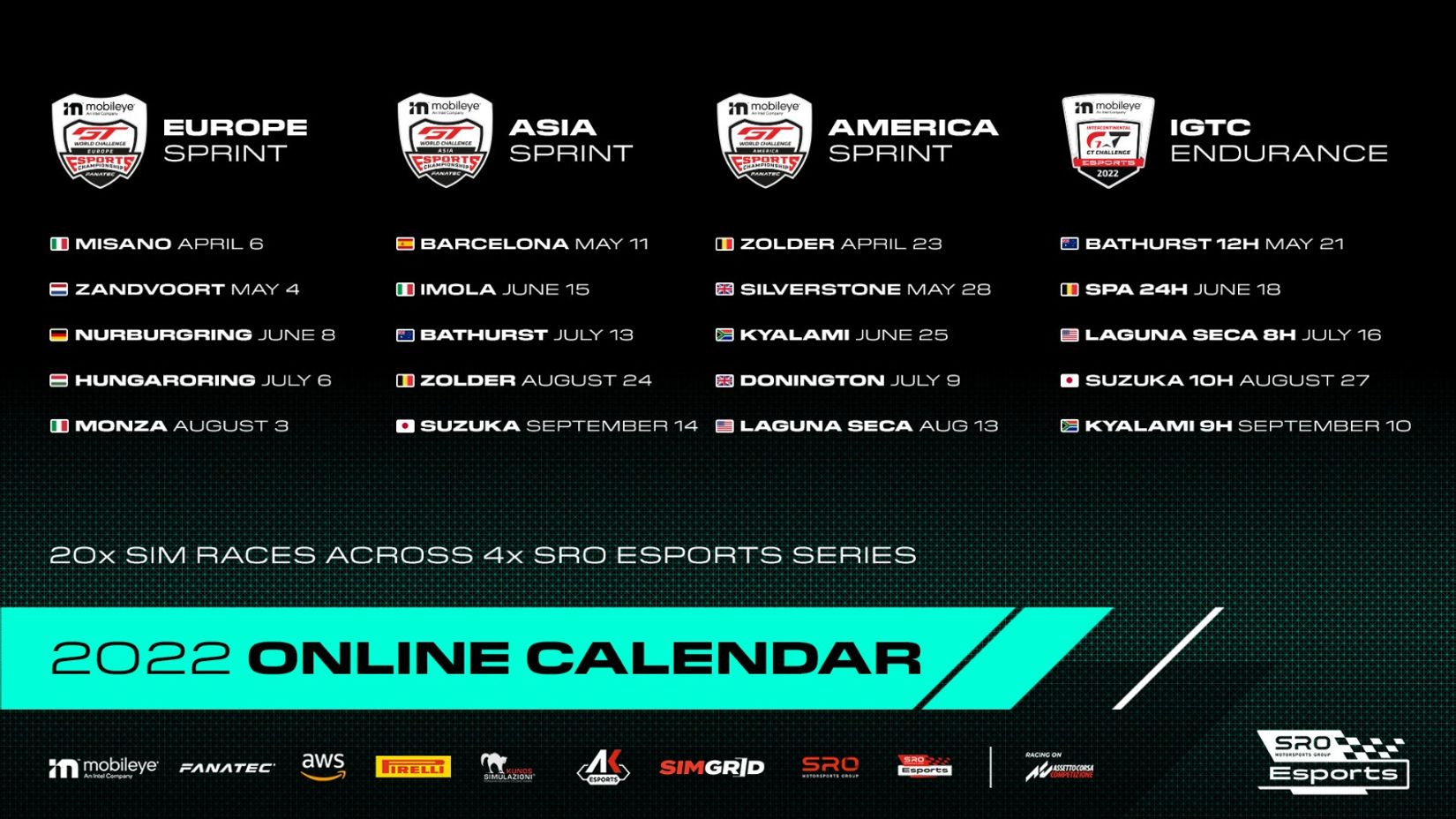