Autonomous Vehicles and the Drive for Pedestrian Safety

Autonomous vehicles should lead to reduced pedestrian collision rates. For National Pedestrian Safety Month, we look at the challenges of this technology .

Since the NHTSA has declared October Pedestrian Safety Month, it’s a good time to look at the impact that autonomous vehicles (AVs) are expected to have on pedestrian safety and what Mobileye has learned in its two decades of developing advanced driver assistance technology for vehicles.

According to the NHTSA, 94% of all collisions are due to human error, so naturally the expectation is that AVs will lead to lower collision rates in general – and specifically lower pedestrian accidents – by removing the human actor from the equation. However, the challenges pedestrians pose to AVs themselves are quite complex.

Gabi Hayon, Mobileye’s Executive Vice President for Research and Development, discussed the likely effects of the advent of AVs on pedestrian safety in a PAVE panel, entitled Autonomous Vehicles and the Long Road to Eliminating Pedestrian Deaths.

Hayon described some of these challenges, “Usually a vehicle drives on a route. It’s rare for a vehicle to make a very erratic movement. A walking pedestrian [however] can stop suddenly, start running, surprise you.”

Mobileye’s AV technology tackles the problem of protecting these potentially erratic pedestrians in a few different ways. First, Mobileye’s AV system is very robust. According to Hayon, “We take multiple approaches. Some are based on object detection, others on stereoscopic analysis, our VIDAR concept, and others on pixel labeling.”

In addition, the pedestrian detection component of the system is learning how to interpret a human’s actions in order to understand their intentions. This second element entails trying to predict how pedestrians are going to act or what they seek to achieve in given scenarios. For instance, the hand gestures of a policeman in the street guiding traffic may mean something completely different from similar gestures by someone waiting at a crosswalk.

A Mathematical Model for AV Safety

Responsibility-Sensitive Safety™ is the third element in Mobileye’s approach to ensuring pedestrian safety. RSS™ is a technology-neutral safety model developed by Mobileye. It oversees an AV’s driving decisions, ensuring that the vehicle is making safe choices.

One of the big challenges to pedestrian safety, especially in urban areas, is that pedestrians often appear suddenly, out of occluded areas – for example, from between two parked cars, not necessarily next to a pedestrian crossing sign. RSS takes this into account in the 4th RSS rule, creating a “visibility area” and calculating a reasonable “worst case scenario” so the vehicle, as it were, expects the unexpected. This may involve giving parked vehicles a wider berth or slowing down in low visibility areas. 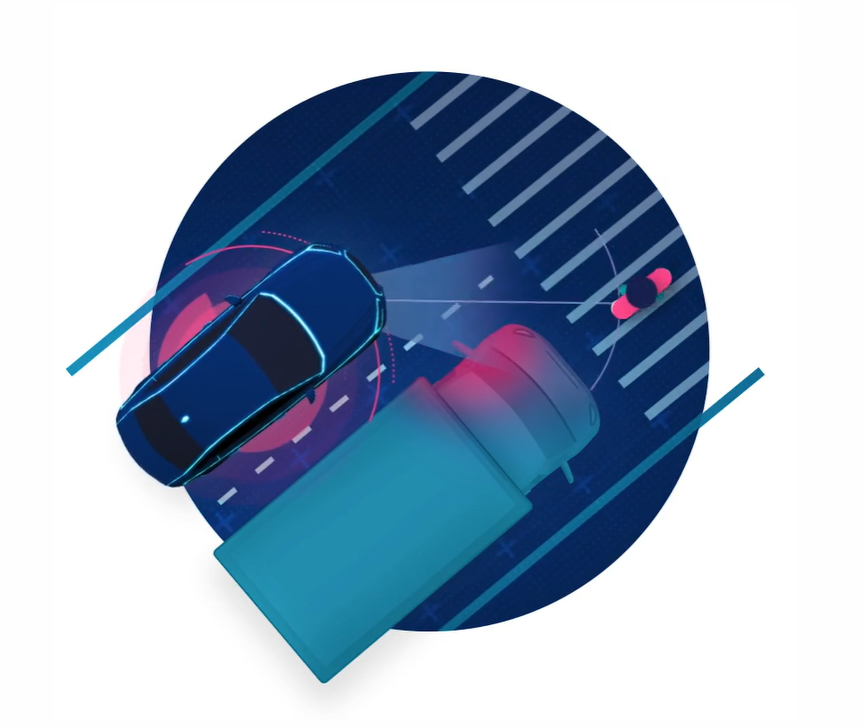 Here, it’s important to note one of the most important features of RSS: it’s an open system. This means that the calculations defining a “worst case scenario” are open and can even be approved by regulators. In addition, RSS is a flexible system, able to adapt to local driving conditions. Dr. Hayon mentions that Mobileye’s AV technology is being tested in two widely divergent urban settings – Munich and Jerusalem – each of which poses its own unique challenges unlike those experienced in the other.

The AV revolution promises to significantly improve safety for pedestrians – not to mention other road users – and it may, indeed, help us reach Vision Zero’s goal of no casualties on our roads. The obstacles along the way will not be easy to navigate, but Mobileye is proud to be playing its part in that effort.