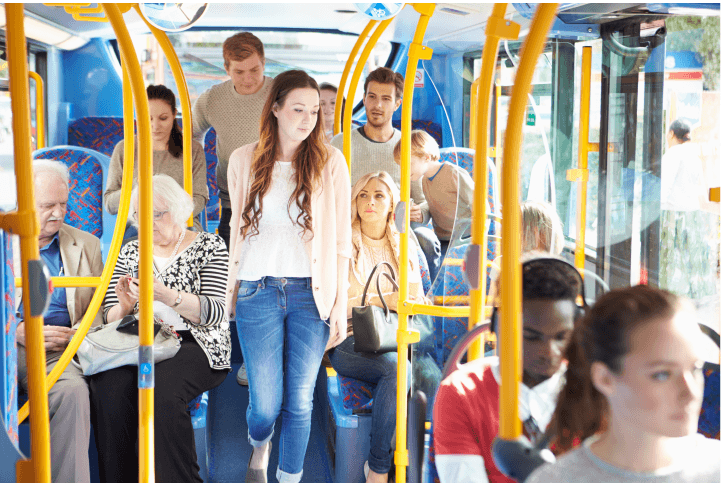 While it’s easy enough to understand the danger posed by collisions to bus passengers, what’s quite surprising is the number of injuries suffered by bus passengers even when there isn’t a collision. While it sounds strange, this is due to the stop and go nature of urban traffic, along with the fact that these passengers are often standing while the bus is moving.

The age of the passengers is of particular importance as in a 2004 report by the American Public Transportation Association it was estimated that by 2030 around 70% of the US transportation market will consist of people 65 and over. However, this large potential customer base may be reluctant to use mass transportation partially out of safety concerns. In fact, the National Center for Senior Transportation notes that, “Fear of falling can make public transportation use a very stressful experience for seniors.”

These injuries not only discourage passengers but can be costly. According to a 2016 article in Public Transport Magazine, injuries to bus passengers in the UK cost more than $176M in 2012, nearly half of that due to passengers over 60.

Mobileye also produces an optimized system for buses called Shield+® with added sensors to account for the blind spots associated with these larger vehicles.

So, what’s the connection between collision avoidance and non-collision injuries? It comes down to driver performance. Studies have shown that by simply installing a collision avoidance system, drivers improve their driving habits. Improved habits, such as keeping safe distance from the vehicle in front of you, leads to less harsh braking. According to the 2009 report “Non-Collision Injuries in Urban Buses,” acceleration followed by harsh deceleration is more likely to cause severe injuries for standing passengers when they lose their balance.

So as a more urbanized world turns more toward mass transportation for solutions, it becomes critical for bus fleets to ensure the safety, not only of other road users but also the buses’ own passengers.

To find out more about how to protect your bus fleet and passengers contact a Mobileye representative.